As told by The Kytherian Association of Australia

The birthplace of goddess Aphrodite

According to Hesiod the sea of Kythera is the birthplace of goddess Aphrodite (Venus). Gaia (the Earth) wanted to punish her husband Uranus (the Sky) for forcing her to keep her children within the bowels of the Earth, so she called on them to help her get rid of their “wild” father. Cronus took a weapon and severed his father’s genital organs, which fell into the sea of Kythera. The foam thus formed travelled by force of wind to the island of Kythera, where Aphrodite came forth.

The island of Kythera is at the crossroads of Mediterranean thoroughfares. It was probably during the Neolithic Period (towards the end of the 5th millennium B.C.) that the first inhabitants arrived in Kythera, as evidenced by the few pottery vases found in the cave of Agia Sophia in Kalamos. Before this, archaeologists believed Kythera’s earliest inhabitants dated back to the 4th millennium B.C., based on discoveries in the cave of Chousti in Diakofti and in the area surrounding Palaiapolis. The number of villages on the island grew significantly during the protohelladic period (3rd millennium). Towards the end of the 3rd millennium B.C. the Minoans extended their domination to Kythera, controlling the area and creating a maritime trading point in Palaiapolis, where there was once a bay (now covered with earth).

Kythera is also one of the strategic sites in the Minoans’ fight against piracy in the Aegean Sea. In Vuono (also called Agios Giorgios) archaeologists found signs of a Minoan “summit sanctuary”, which served three different purposes: it had a religious function, it served as an observatory, and as a “lighthouse” for maritime navigation. In the late 15th century B.C. the Minoan colony followed the decline of Minoan Crete’s metropolitan territories, and it was exactly at that time that the Mycenaeans arrived on the island. As the Mycenaean empire declined the Dorians colonized the island (around the end of the 12th century B.C.); Kythera was then subordinated to the city-state of Argos. The time at which the Phoenicians arrived on the island still remains a mystery; this people had mastered the much sought-after art of extracting a dark red colour from a rare mollusc called “porphyry” (Molinus brandaris). This color is one of the most expensive export commodities. According to Herodotus the creation of Aphrodites’s sanctuary is the work of the Phoenicians, who brought the worship of goddess Astarte in from the East. 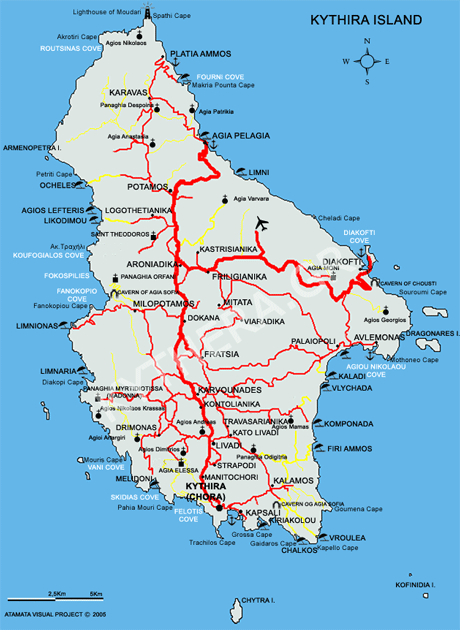 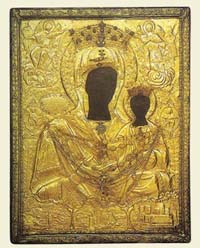 The Icon of the Most Holy Theotokos “Of the Myrtle Tree” (Myrtidiotisa) is in the monastery church of Myrtides Kythera. It derives its name from the fact that it was found in a myrtle bush in the fourteenth century. At that time, a shepherd was tending his sheep in a deserted valley which was filled with myrtle bushes. On September 24, forty days after the Dormition, the Mother of God appeared to him and told him to seek her icon which had been brought to that place many years before.

The shepherd fell to the ground in amazement, praying to the Theotokos. As soon as he got up and turned around, he saw the icon in the branches of a myrtle bush. Weeping for joy, he brought the icon home and told his friends and relatives about how he had found it.

When he awoke the next morning, the shepherd found the icon missing, and thought that perhaps someone had stolen it during the night. With a heavy heart, he led his sheep back to the spot where he had found the icon. To his amazement, he saw the icon once again in the branches of the myrtle bush. Glorifying God, the man took the icon home with him once more. The next morning, it had disappeared just as it had before. When this happened a third time, the shepherd realized that the Mother of God wanted her icon to remain where it had first appeared.

A small church was built to house the icon, and was called “Of the Myrtle Tree,” after the icon. The building was replaced and enlarged over the years, and many miracles took place there. 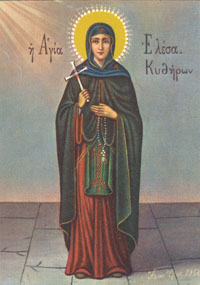 On a mountain resembling a ship, above Livadi, is a monastery called Agia Elessa. It owes its name to a woman who became a martyr on the spot where it was built.

Ayia Elessa came from the Peloponnese. She was the daughter of a wealthy man named Elladios who was a pagan. Her mother, Eugenia was a devout Christian. Elladios and Eugenia were unable to have children. However, through the power of prayer, Eugenia miraculously became pregnant and Elessa was born. The child was raised as a Christian. Eugenia died when Elessa was only 14 years of age, thus leaving her as the lady of her father’s house. From such a young age, Elessa converted to Christianity and sought to help the poor people in her community.

Her father attempted to force her to marry a pagan ruler but she refused. He continued to persecute her for her Christian beliefs.

One day when her father left on a trip, Elessa divided all her belongings and gave them to the less fortunate before leaving for Kythera, on a boat with her most loyal of servants. Along the way, she performed miracles such as healing a man who had been bitten by a snake.

According to the Church’s texts, Elessa arrived on Kythera in 375AD, wanting to live out her life totally dedicated to God. Upon her father’s return from his trip, he was enraged to learn about Elessa’s departure and pursued her to Kythera. He then followed her up a mountain where he found her and tortured her mercilessly. She escaped from him through a split in the rock face of the mountain that suddenly appeared. However, he finally caught up with her and decapitated her.

In 1871, the Monastery of Ayia Elessa was built on the mountain where she suffered her martyrdom. Her remains are buried there. A monument has been placed near the split in the rock. The mountain is 433m high and offers amazing views of almost the entire island and the southern coastline of Kythera as well as sweeping views towards Anti-Kythera and Crete.

Ayia Elessa’s remarkable but short life is celebrated on the island every 1st August with a beautiful service and Panayiri at the Monastery. 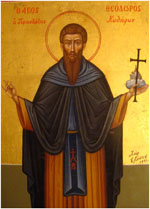 The Monastery of Ayios Theodoros lies within a verdant area between the villages of Logothetianika, Aroniadika and Pitsinades. It is the place where Ayios Theodoros, the island’s patron saint, lived as a monk in the10th century AD. Ayios Theodoros was from Koroni and came from Monemvasia to the island to live ascetically. He was raised and educated in Nafplion, where he got married and had two children. His great desire to become a monk led him first to Rome and then to Monemvasia. From there he came to Kythera around 921 AD and lived in the ancient church of Agioi Sergios and Bakchos. He died in 922 AD, his relic was found by Monemvasian sailors a few years later.

According to Caracher: “St Theodore was one of a number of Byzantine Saints who were privileged to know the day of his death. In fact, when soldiers found him, he was lying next to a potsherd, a quintessentially mundane object, inscribed with the text, “I. Theodore, humble deacon, laid down in sickness on April 7th, and I died on the 12th of May, on the day of the Holy Epiphany. Here time has truly collapsed, as an ordinary object made manifest that an ordinary man at the very hour of his death gained a glimpse of the divine mind, in which time does not exist.”

The Monastery was built in his honour at the place of his burial during the period Georgios Pachis from Monemvasia was the governor of Kythera. The Bishop of Kythera, Athanasios Valerianos, renovated the temple around 1630. He added a bell tower over the main entrance and built in a shield with an inscription indicating his name. During Venetocracy the monastery of Ayios Theodoros was the seat of the diocese. The grand roman-style building in the courtyard served as a boys’ school in the years of British rule. Iit is the famous peer tutoring school of Ayios Theodoros.